BANNED BY THE BBC!
Available Now!
Click here for more info and to order.

Banned by the BBC! answers the “what happened next?” question The Boat that Rocked (Pirate Radio, in USA) posed, and provides a provocative bookend to that tale.

When the pirate radio ships were banned by the British government in 1967, their legacy was continued by clandestine land-based pirates, risking capture at every broadcast to break the BBC’s radio monopoly.

Co-founding notorious Radio Concord in 1971 until 1977, this personal memoir spans the never-before-told inside story of pirate radio, squatting, punk music, social issues, and revolutionary politics I experienced in the demi-monde of London in the 1960s and 70s.

Why was my phone tapped? What made the police, Special Branch, crime reporters, and even the post office pursue me? Free speech, and privacy rights come at a steep price in any age, as we now know in this post-Manning, Assange and Snowden world.

Banned by the BBC – song by Three Bonzos and a Piano:

Riveting adventure story and important piece of radio history
“Levine does a wonderful job of showing what it was really like to be part of a pirate radio station in London, trying to free the airwaves from the tight control of the BBC. We follow him over rooftops, running from the cops, connecting with similar souls, meeting famous musicians and being on the cutting edge of London culture in the 1960’s and 70’s. His radio shows become more political–as he connects with a cast of characters from all walks of life, always aiming to create a more humane society. In our world of screens right now, this is a riveting, humorous and refreshing read!” – Louise N.

Couldn’t Put It Down!
“Levine spins the tales of his pirate radio adventures in a voice, like a DJ, that is both witty and intimately personal. Equal parts historical chronicle, juicy never-been-told stories of the movers-and-shakers of a cultural revolution, and action thriller, this book invites us to tag along through London’s burgeoning underground scene — and beyond — with one of its most adventurous denizens to witness the moments that, altogether, would make an indelible mark on music, radio, and social justice activism for all time. For anyone who has ever turned a radio dial in the UK, this book is a must-read. For me, an American, it was a fascinating view into the British counterculture, which took on a very different flavor than its American analog. Few books manage to be as historically important and so entertaining at the same time. Highly recommend!” – Purple Hazel Green 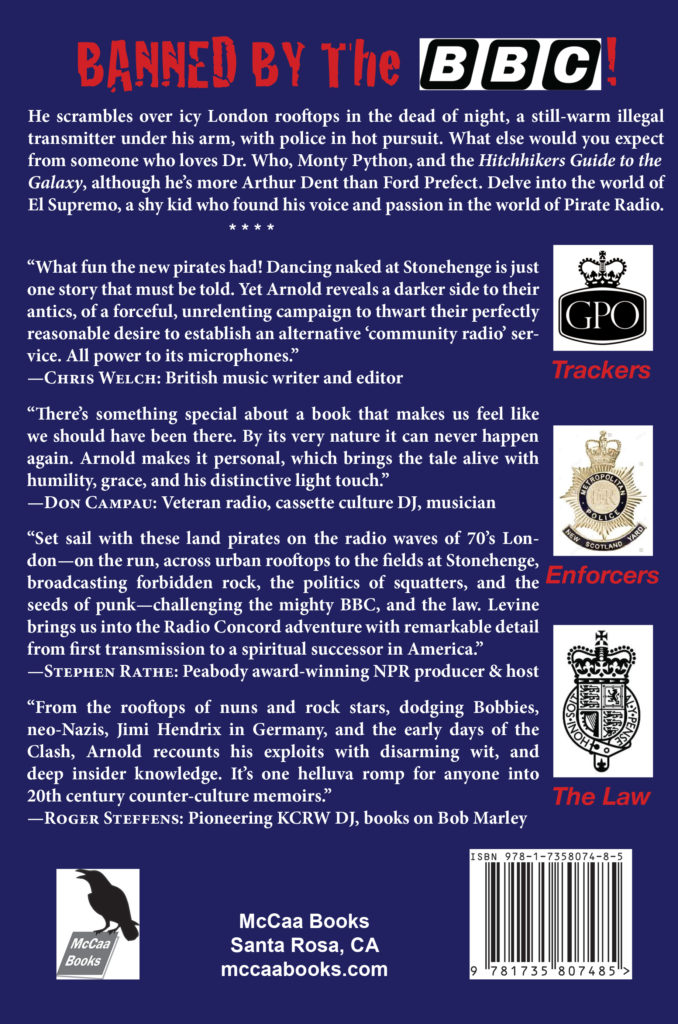